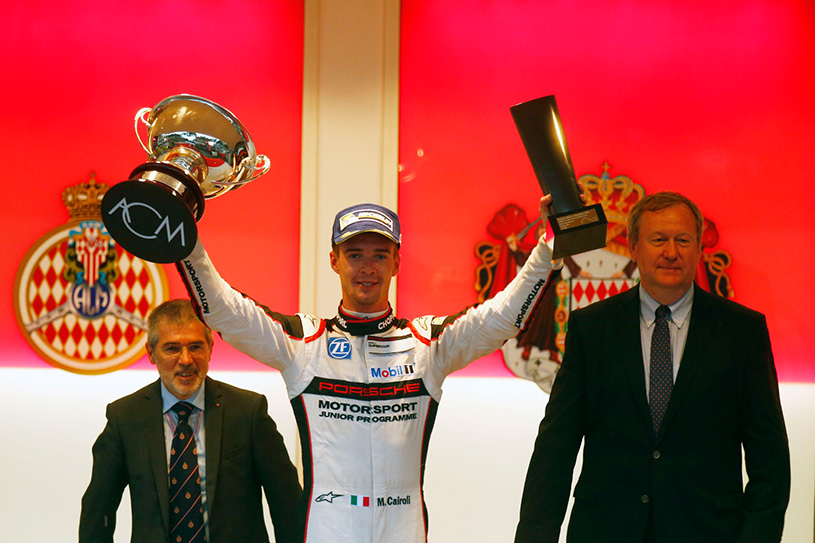 29.05.2016: Despite unusually wet weather conditions in Monaco FACH AUTO TECH had every reason to celebrate. The Porsche team from Sattel in central Switzerland managed the double with the victory of Matteo Cairoli, after the 2015-win of Jaap van Lagen. Philipp Frommenwiler also wrested important points for the championship from the rain on the Riviera.

Matteo Cairoli (I), #7: “The rehearsal was faulty, but the performance was terrific. Matteo Cairoli’s few laps in free practice ended with vehemence in the crash barriers. “Up to the impact, the car felt really good; luckily I didn’t damage it too badly,” the rapid Italian reported. Although he had a training deficit he burned the pole position into the Monaco asphalt with the repaired racing machine.

“I have tested twice the limits of the track, so I know it for the race,” said the 19-year-old with a wink. His qualifying ended at the guard rails in Rascasse.

The race on the tight street course started on Sunday morning behind the safety car due to the rain and was marked by some yellow flags and a safety car phase. Even under these adverse conditions, the Porsche-Junior again was the measure of things. He expanded his leadership to the end. As the race was stopped by the red flag he drove three seconds in front of Klaus Bachler and Michael Ammermüller.

Matteo Cairoli: “What a fantastic result here, it was really difficult to drive. If I saw that Klaus wasn’t so hot on, I drove down the risk. Finally it was almost waterskiing…”

A lucky Alex Fach had no words: “It is fantastic. Matteo had a great coolness today. We are absolutely happy.”

Philipp Frommenwiler (CH), #6: Philipp Frommenwiler had hoped for more. After the free practice he was in eleventh position, but could not improve for the starting grid. “Regarding to the impact into the barriers my today’s qualy ended only on 12th place. But we can start the race on Sunday,” he remarked concerning his starting place in the sixth row. The damage to his Porsche was slight.

After the start of the race by the safety car the Swiss stuck in the middle of spray and tumult of the battle unlike his teammate. During the fifteen laps on the 3.3 kilometres long track it crashed all around the 26-year-old. With high concentration, caution and luck he curled his Porsche on the sophisticated paving to twelfth and earned six points. After cancelling the race by the race director Sven Müller sent him into the pile of tires.

“Fortunately, the race was already stopped when Sven hit me. So this action has no consequences for my result”, Philipp Frommenwiler announced later. His team chief was not dissatisfied: “What a pity! Already on Friday Philipp had yellow in the last sector of his fastest qualifying lap. We have extrapolated: He would have been sixth on the grid. Under these conditions he has made the best of his starting situation. I think that ‘his’ racetracks are yet to come.”

The next points and trophies of the Porsche Mobil 1 Supercup will be distributed on 03rd of July. Then the heroes of the fastest Porsche brand trophy series will compete in Spielberg (Austria). (petra weddige, motorsport-concepts.de; Fotos: Porsche)

Summaries and repetitions can be watched at Eurosport and Sky during the following week.