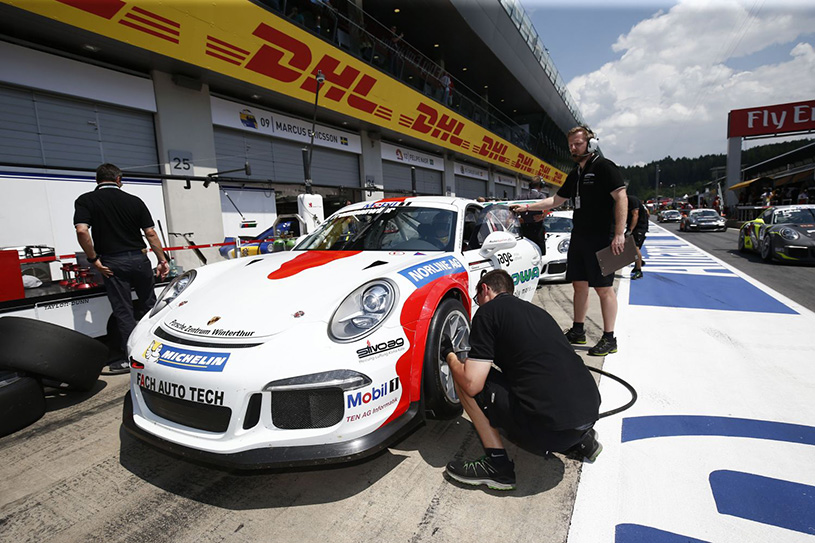 It’s not going to be comfortable at “home of British Motor Racing”. Meteorologists forecast rain for the coming weekend of the Porsche Mobil 1 Supercup. But not only because of the weather, FACH AUTO TECH is preparing meticulously for the traditional race track of Silverstone/England.

Matteo Cairoli (I), #7: After the provisional cancellation of the result at the Red Bull Ring Matteo Cairoli should not become discouraged by this decision. Alex Fach explains: “The point is that the technical scrutineers have adjudged the car too light after the race in Austria. We have appealed. I can’t say more because of the pending proceedings.” The team chief is confident that his protégé gets back his points, but makes little hope for a quick judgment. “I’m afraid that a few weeks will go by, until we know more.”

Philipp Frommenwiler (CH), #6: Philipp Frommenwiler has every reason to be optimistically about the next championship round after the race at Spielberg. The Swiss pushed up his successful course based on a spotless race and a formidable sixth place. Alex Fach: “Philipp performed extremely strong in Austria and moved up into the top flight. This result has been long expected and I think he can do it again at Silverstone.”

The race on the 5.9 kilometres long Silverstone Circuit can be followed live on TV on Eurosport2 and Sky Sport 1 channel or online at racecam.de.

Summaries and repetitions can be watched on Eurosport2 during the following week.