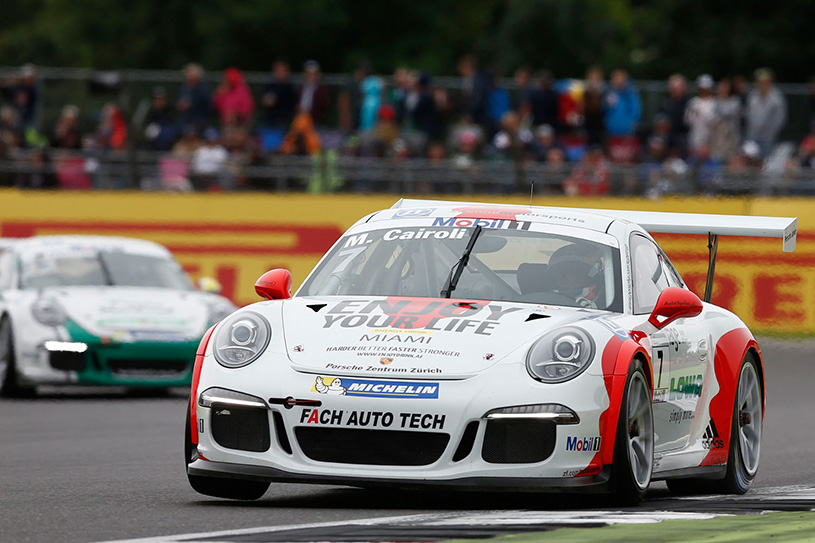 The very British weather during the fourth round of the Porsche Mobil 1 Supercup only marginally affected the Porsche-Junior in the services of FACH AUTO TECH. Matteo Cairoli made a third place, got a trophy and scored important championship points. On the other hand Philipp Frommenwiler had problems with the Silverstone conditions.

Matteo Cairoli (I), #7: Even in qualifying the typical rain had become to tip the scales. All the better lap times were possible towards the end of qualifying on a drying track. Matteo Cairoli virtually used the last chance of a place in the front row before a yellow phase cut the hunting for the fastest times of the competitors. “Again we are very close together,” he commented on the distance of just 14 thousandths of a second to poleman Mathieu Jaminet. “I am optimistic for the race.”

The race in England on Sunday morning started with a break-off. Rain tyres were mounted frantically on the grid after a rain storm and before a new launch took place behind the safety car. Matteo Cairoli fought in the top group with Mathieu Jaminet and Sven Müller. They have changed positions several times in the spray. At the end the FACH pilot crossed the finish line in third place.

“The setup did not work well,”the 20-year-old reported and team boss Alex Fach added: “Unfortunately, in the hurry we had no time to change the setup. Matteo has made the most of it. So we are all very satisfied with his result.”

In the championship, his protégé is now provisionally third with 56 points. Whether he gets back his points from Spielberg is going to be legally decided after the next race in Budapest. Alex Fach: “Certainly no one can easily shake off this decision of Spielberg. Even against this background, the result here is really positive.”

Philipp Frommenwiler (CH), #6: The weather conditions on the 5.9 kilometres long Silverstone Circuit have badgered Philipp Frommenwiler. Already the yellow flags in qualifying prevented a better grid position for the Swiss.. At position 14 of the starting grid his conditions for a repeat of the success of Spielberg were only slight.

During the race he struggled with the same problems as his teammate and dropped back gradually. With a 21th rank the 26 year old and his team chief were not satisfied at the end. After all, he collected three points for his championship account and is guided to ninth.

The next points and trophies of the Porsche Mobil 1 Supercup are going to be distributed on 24th of July in the Hungarian capital. The heroes of the fastest Porsche brand trophy series are competing in Budapest (HU).

Summaries and repetitions can be watched at Eurosport and Eurosport2 during the following week.