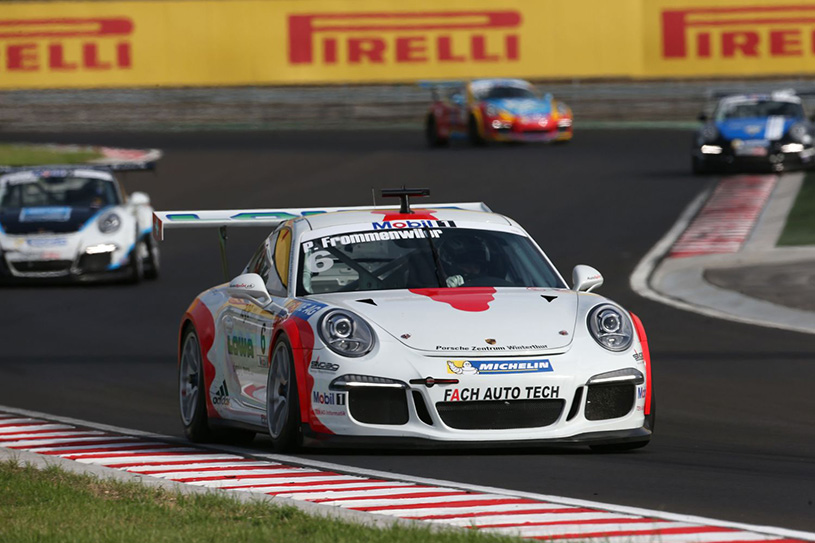 This weekend of the Porsche Mobil 1 Supercup in Budapest FACH AUTO TECH registered 21 points. Main supplier of those points in the team from Sattel in central Switzerland was Philipp Frommenwiler, who outperformed his teammate Matteo Cairoli for the first time.

Philipp Frommenwiler (CH), #6: A spotless improve of his performance Philipp Frommenwiler entered to the diary of his team chief Alex Fach. From the beginning of the weekend on the Hungaroring the Kreuzlinger has been represented in the top 10. Realizing a perfect qualifying lap he has placed his 460-hp Porsche 911 GT3 Cup in the third row of the grid. Never before in a Supercup race he was as good as on these 4.4 kilometres.

“Over the qualifying Philipp was pressurized because he only had one good set of tires. He has really mastered it with steady nerves,” Alex Fach commended his driver.

The start of the fifth championship round of the season was nearly perfect for the 26-year-old. During the first couple of corners he positioned himself in fifth place and defended it until the finish. In the table, he climbed up to eighth place.

Philipp Frommenwiler rejoiced: “Successful race! Best result of the season and a lot of points for the championship. To be continued at Hockenheim next weekend!” The team chief has set new targets: “We are very happy for Philipp and I’m sure a podium finish is still possible this year. We are working on it.”

Matteo Cairoli (I), #7: Although he lacked only a blink of time on the pole sitter Robert Lukas, the crew around Matteo Cairoli was not quite satisfied after qualifying. “We have missed the right moment for a fast lap”, Alex Fach commented the third grid position of his protege. His Italian driver had already been three times on the pole position this season and is contender for the championship.

In the race, the unhappy weekend continues seamlessly. Already at the start, the successful Porsche Junior lost some positions and arranged behind his team-mate Philipp Frommenwiler. Finishing the Hungarian race he got the chequered flag as seventh and booked nine points to his account. Now in the preliminary overall standing he is ranked behind Sven Müller, who could win this weekend and Mathieu Jaminet who pocketed a failure.

Alex Fach reported: “Matteo has actually lost his race at the start. He also lost another position during the fight with Philipp. We are going to analyze it”

The next points and trophies of the Porsche Mobil 1 Supercup are going to be distributed on 31st of July. The heroes of the fastest Porsche brand trophy series are competing in Hockenheim (D). Alex Fach is confident: “We have been tested at Hockenheim and should overtop the result of Hungary there.”

Summaries and repetitions can be watched at Sky Sport1 and Eurosport2 during the following week.