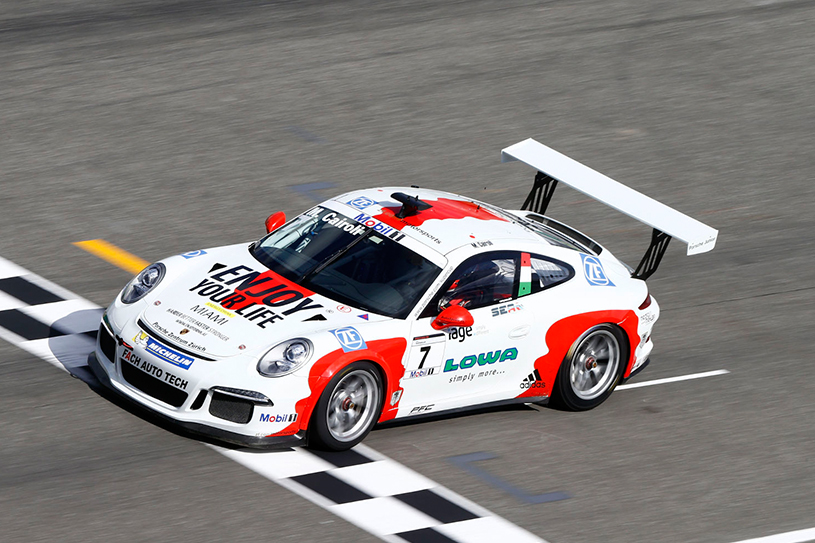 On the back of a victory FACH AUTO TECH started the second half of the Porsche Mobil 1 Supercup season 2016. In the Baden Motodrom at Hockenheim the team from Central Switzerland has persuaded by the results of Porsche-Junior Matteo Cairoli; also Philipp Frommenwiler was clearly in line with his trend.

Matteo Cairoli (I), #7: All points back and a complete rehabilitation Matteo Cairoli and his crew achieved last Tuesday. After the Spielberg race the scores of the young Italian which he obtained in Austria were temporarily deleted. “I am glad that this problem is solved. Powered by the second position in the standings now, we have back all of motivation,” Alex Fach said ahead the first training in Hockenheim.

On the 4.6 kilometres of the Grand Prix Circuit Matteo Cairoli turned in a brilliant show featuring his 460 horsepower racing car. Because of a red flag stopping during the qualifying he had initially to settle for the second position on the starting grid. “I was on a really quick lap before the red flag ended the session”, he commented his place behind Sven Müller “Matteo has already driven the fastest times in two sectors. Certenly it could have been the pole position,” Alex Fach remarked.

Also at the start of the race the Porsche youngster was back to his old condition. He perfectly got off the starting blocks and was in front even to the first corner. In turn one he forced poleman Sven Müller into a mistake and set the basis for his later triumph. After 14 exciting rounds Matteo Cairoli optically crossed the finish line behind Sven Müller but the German was imposed an one second penalty for the unauthorized benefit in turn one. Third on the podium was Jeffrey Schmidt.

Alex Fach: “A hard week is behind us. We are really happy and feel relieved about this result. Only two points behind the top spot. We are back to normal!”

Philipp Frommenwiler (CH), #6: As strong as in Budapest Philip Frommenwiler was performed on the Hockenheimring. The Kreuzlinger drove in the top 10 from the beginning on and qualified for the seventh grid position. He also had become “victim” of the red flag.

In the sixth race of the Porsche Mobil 1 Supercup season the FACH-pilot started not as well as his teammate. Until the first corner he had been passed by three cars, but up to the end of the first lap he brilliantly faught some positions back. After exciting duels the sympathetic Swiss came in as ninth. By holding now 45 points, he climbed up to seventh place in the standings.

Alex Fach: “Philipp has had a enormously strong weekend. It was one of the best races he ever has driven. Unfortunately his start wasn’t so well as usually, but then he has fought like a bear, has overtaken and his positions defended. The television cameras have captured his dedicated race very impressively.” The 26-year-old was just as frequently on TV as his teammate at the top.

The next points and trophies of the Porsche Mobil 1 Supercup are going to be distributed on 28th of August. The heroes of the fastest Porsche brand trophy series are competing in Spa-Francorchamps (B).

Summaries and repetitions can be watched at Eurosport2 during the following week.