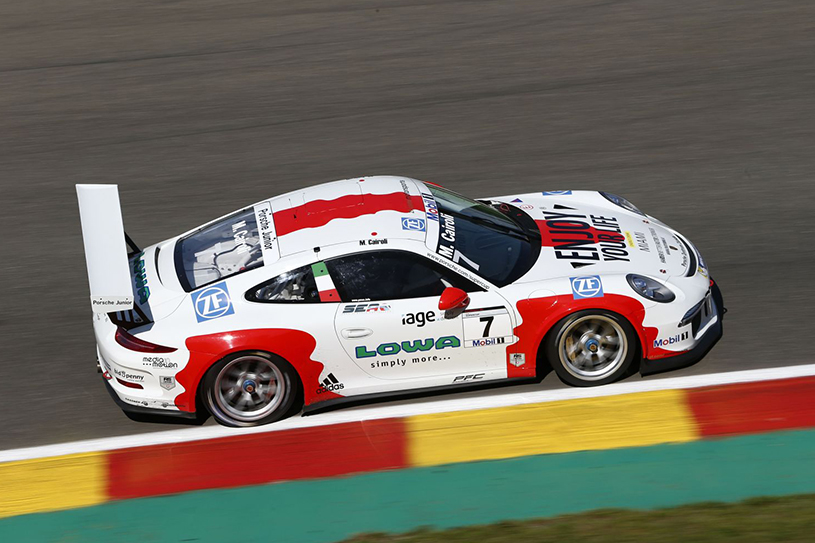 After the second to last European race of the Porsche Mobil 1 Supercup FACH AUTO TECH is connected to the top further on. Matteo Cairoli, racer of the team from Sattel in central Switzerland, collected important points. Despite strong performance in Spa Francorchamps Philipp Frommenwiler, the second FACH-pilot, had to drop points through no fault of his own.

Matteo Cairoli (I), #7: Twice Matteo Cairoli set the fastest time of the strongest Porsche brand trophy. He dominated both: free practice and qualifying. Nevertheless, the young Italian had to start from the fourth position, in the second row. “My mistake, I have seen the yellow flags too late,” the 20-year-old stated. He had not reduced his speed in a yellow sector during the Friday practice. The race director remitted a grid penalty of three places. “I still hope to be able to finish on the podium.”

Said and done: Already in the first lap of the seventh championship racing the Porsche-Junior caught the third position. About 77 kilometres later the youngster on the FACH Porsche has finished behind Mathieu Jaminet and Sven Müller.

Decision after the race: Due to the protest of a competitor Matteo Cairoli has lost his podium finish and was downgraded to the fourth place. “We will not appeal. I’m tired of negotiations and rulings beside the race track,” team chief Alex Fach said annoyingly. By six points behind the leader Sven Müller the youngster from Como lurks within a touching distance.

Philipp Frommenwiler (CH), #6: Philipp Frommenwiler celebrated his birthday this weekend and started with a strong practice on Friday. Fifth position was a hopeful beginning on the racing rollercoaster in the Ardennes. During the qualifying on Saturday afternoon he drove only four laps. “Ninth place on the grid for tomorrow’s race! We saved a set of tires and hope for a key advantage,” the 27-year-old confidently commented his qualifying result.

However, the birthday child from Saturday could hardly put in scene his good performance on Sunday morning. Yet on the first metres of the race in La Source the white-red Porsche was just rotated by the Swiss Jeffrey Schmidt. Philipp Frommenwiler dropped to the end of the field and started his comeback. In the ninth round he was already advanced to midfield when he was cleared away a second time by Paul Rees whom he had passed before. The FACH driver with the # 6 ended involuntarily on a salvage crane of the track marshals.

Alex Fach later said: “Philip had a phenomenal start to the weekend, but he became victim of the turmoil after the race start. I will not blame Jeffrey. Things like that can happen. The situation with Paul Rees is different. It was an absolutely unnecessary move which destroyed Philipp’s race and the car. The damage is immensely. We are going to have a lot of work up to Monza. We don’t need such a weekend once again.”


The next points and trophies of the Porsche Mobil 1 Supercup are going to be distributed on 04th of September. The heroes of the fastest Porsche brand trophy series say farewell Europe in Monza (I). (petra weddige, motorsport-concepts.de; Fotos: Porsche)

Summaries and repetitions can be watched at Sky Sport 1 during the following week.