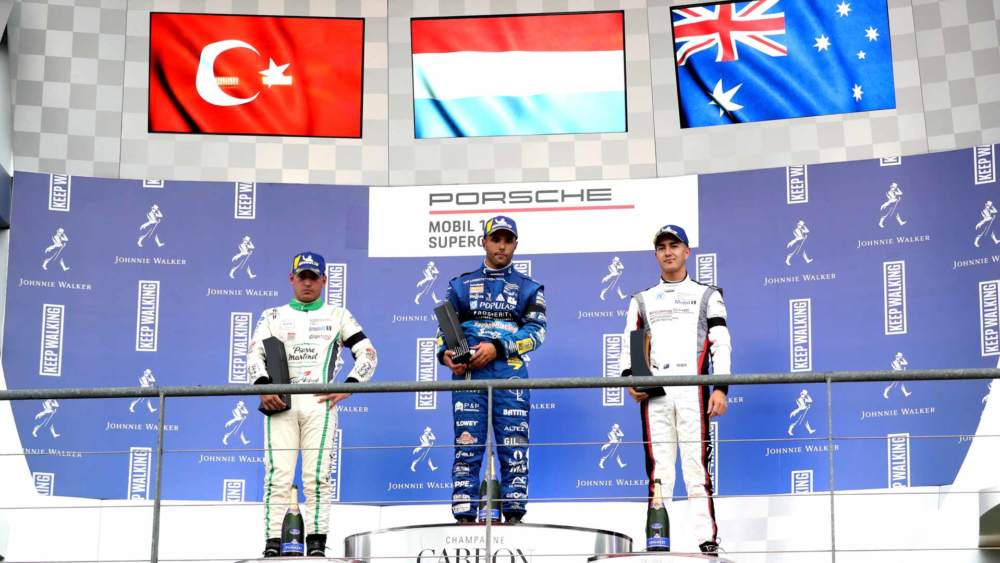 A first Supercup podium for Jaxon Evans, fastest lap time and valuable championship points! The seventh round of the Porsche Mobil 1 Supercup in Spa, Belgium was more than worth the trip for FACH AUTO TECH.

“This is a significant step forwards”, Team Principal Alex Fach concluded. “We often had a lot of bad luck in previous races and fell short of our own expectations. But the Spa result has proved we’ve made optimal use of the summer break. Jaxon and Florian are our two drivers that have made it to the top 5 and this is a great motivation boost for the season’s final spurt.”

Evans started his impressive performance with a fourth-fastest time in qualifying and subsequently topped that with a perfect race start, enabling the 22-year-old to gain a position before the first corner. Thanks to fast lap times, the FACH AUTO TECH driver remained in striking distance of the two leaders throughout the entire 13 laps and crossed the finish line in third place, with a gap of just a few tenths of a second – this meant the youngster could secure his first podium finish in the Porsche Mobil 1 Supercup!

Starting from seventh on the grid, teammate Florian Latorre also produced a similarly strong achievement. The Frenchman seized an opportunity in the first lap and overtook two opponents at the end of the long Kemmel straight. This successful manoeuvre paved the way to fifth place for Latorre and also secured him twelve further championship points for the driver standings. He now ranks fifth with three races to go – and is within reach of the championship top 3.

Kantadhee Kusiri started the race in Belgium from a grid 18th and had to face a midfield famous for its tough conditions. Nevertheless, the Supercup rookie proved he’s able to ride the storm in tight spots. “An opponent in front of me lost control of his car and I only just managed to avoid him, costing me a lot of time, but not the race”, said Kusiri, who came in eighth in the Rookie classification.

Eighth round of the Porsche Mobil 1 Supercup season is scheduled for the 8 September, only a week after the Belgium guest appearance. The one-make trophy takes place on the traditional circuit in Monza, Italy and this makes it the European final before the season ends in Mexico late October.