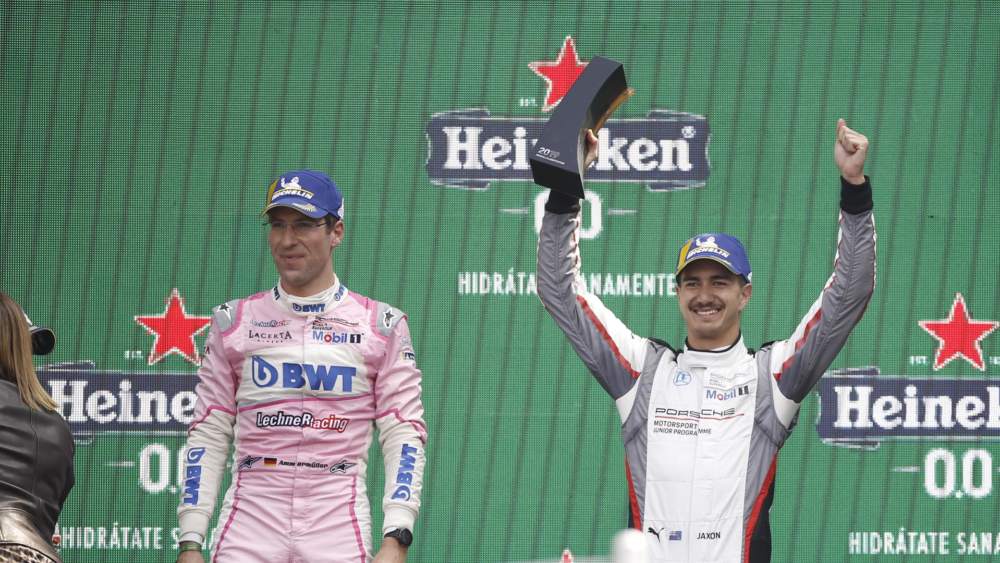 The Porsche Mobil 1 Supercup season ended on a high for FACH AUTO TECH with a podium finish in Mexico City. A strong recovery drive with plenty of perseverance was the key to success for New Zealander Jaxon Evans, who secured his second top-three finish of the season.

“That was hard work,” Evans said after a hard-fought race. “I started the race from sixth on the grid, which wasn’t bad. I knew we had the pace to finish on the rostrum here.”

The Porsche junior driver made his move in the opening stages of the race. The 23-year-old went on the attack in the first few turns and found himself in a five-way battle for third. “I was right in the middle of the action and tried to put some pressure on my rivals,” Evans said. The young Kiwi completed the overtake on lap nine, making his way past two other cars and into third.

Kantadhee Kusiri was also in good form in Mexico. The Thai driver finished tenth in the first of two races at the Autódromo Hermanos Rodrígiuez, a performance made all the more impressive by an issue on the car. “I only had five gears available to me for the final few laps, which really hurt me on the long straights,” the 26-year-old said. “My top speed was significantly lower than all the other cars.”

Florian Latorre, who drove the #5 Porsche 911 GT3 Cup car had a mixed weekend in spite of some good grid positions. After finishing 13th in Saturday’s race, the Frenchman crossed the line in eight on Sunday and fifth in the championship overall.

For Team Principal Alex Fach and his crew, the double-race weekend capped of a season of highs and lows. “We had numerous setbacks this year, but we never gave up and always came back fighting! All of this would never have been possible without our strong partners and the unrivalled dedication of our crew. Above all, I am delighted to see FACH AUTO TECH retain its position as one of the leading promoters of young talent in the sport. Jaxon’s pole position in Monza and Kantadhee’s podiums in the rookie class are a testament to that.”

The team’s work with young drivers in cooperation with Project 1 also bore fruit. Marius Nakken improved on a race-by-race basis in his debut season, and managed to finish seventh in both races at the final round of the season in Mexico.