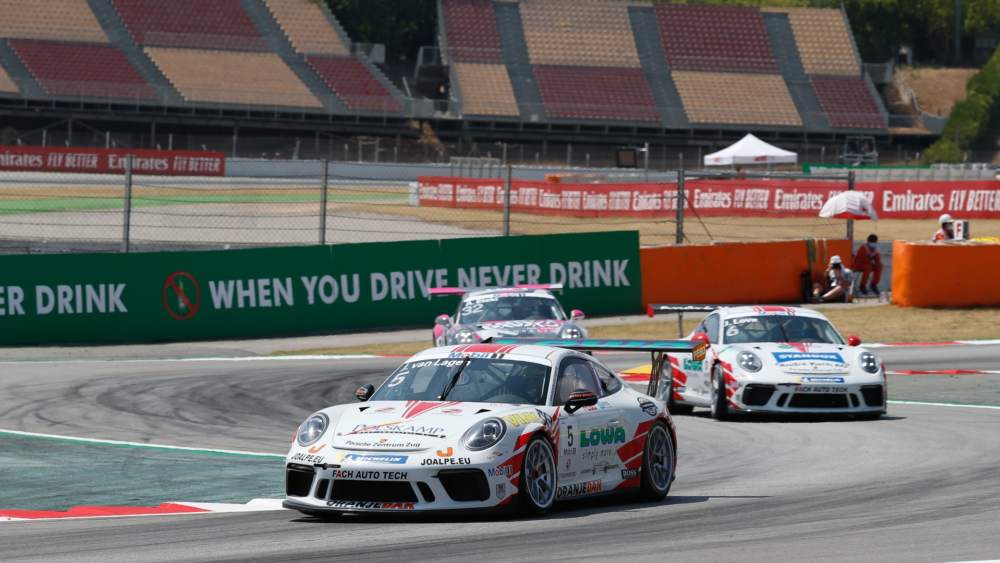 An exciting start, a safety car phase and an ensuing race interruption: the Porsche Mobil 1 Supercup race in Barcelona had a lot of challenges in store for FACH AUTO TECH. Jordan Love remained unimpressed by them all and delivered a strong performance, pushing himself forward to eleventh place. After the restart, Jaap van Lagen saw the flag in seventh.

“In view of the events, we’re still not where we want to be. However, Jaap and Jordan made a good impression today”, Team Principal Alex Fach explained. “A penalty forced Jordan to begin the race from way back, but after both starts he made fast progress towards the front and gained nine positions in total. That’s a remarkable achievement. Anyone who watches the Supercup knows that overtaking is incredibly difficult in this field.”

The safety car appeared at the worst possible time for van Lagen and Love, the FACH AUTO TECH duo having used their good start momentum to make up several positions. The Dutchman moved to fifth in the first lap, his teammate was able to gain six positions and after a few corners he was already 14th. The pursuit was ended abruptly though and a temporary race interruption followed the safety car phase.

The field reassembled for the restart based on the positions after the first two turns, which meant van Lagen and Love had to start from fifth and 14th. The young Australian picked up where he had left off in the first part of the race and gained three more positions. He then held on tightly to eleventh position till the end, thanks to a flawless race. He also secured fourth place in the Rookie class.

Jaap van Lagen, on the other hand, could not convert his strong start at the Circuit de Barcelona-Catalunya into a top position. “I was able to improve my position at the restart, but then got caught in the crowd. The Porsche was damaged in the process, so that I couldn’t fight for a better position and finished seventh,” said the Dutchman after the race.

Next stop for the international one-make series is Belgium. The seventh and second-to last race of the season is scheduled to take place on the Circuit de Spa-Francorchamps.