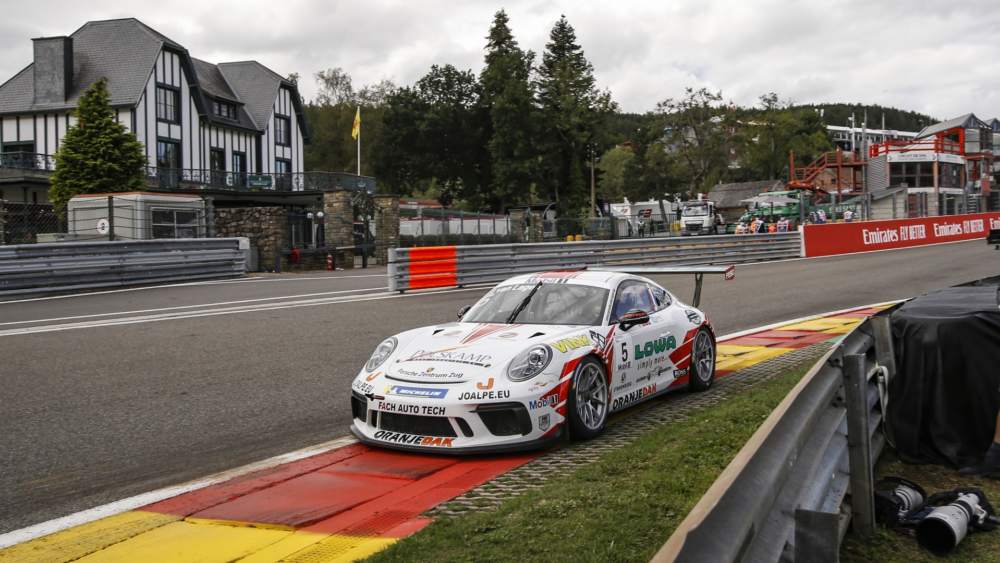 Thanks to nail-biting and high speed duels, the seventh out of eight rounds of the Porsche Mobil 1 Supercup season on the Circuit de Spa-Francorchamps was quite something. FACH AUTO TECH driver Jaap van Lagen was smack in the middle of the fight for top spots and finally secured a sixth place in the spectacular race on the Ardennes roller-coaster.

“Wow, it hasn’t been as tight as that in a long time!”, says Team Principal Alex Fach.” “The first six drivers crossed the line within less than three seconds. That’s proof of the series’ high power density and makes it a figurehead for motorsport. It was important for us to keep the pace and be within striking distance up till the finish.”

Dutchman Jaap van Lagen in the Porsche #5 built up pressure straight away and needed just a few laps to squeeze forwards from a grid eighth to sixth position. “Each lap pushed the frontrunners closer together and at the end, there were seven cars up front fighting for the podium”, said the 43-year-old from Ede, looking back on the race.

The duel between van Lagen and fellow countryman Larry ten Voorde was one of the race’s highlights and the pair delivered a fierce and breakneck sparring match for fifth place – much to the delight of TV spectators. However, the FACH AUTO TECH stalwart had to admit defeat by just a few tenths of a second.

Jordan Love too found himself in the crowd after the start. “It was a rough ride, I’ve got used to that in the Supercup”, the Australian reports after not feeling entirely satisfied with his point haul at the Spa debut. “If you start from tenth on the grid, then you should at least finish better than eleventh. At half-time I lost several positions and couldn’t catch up again.”

After Belgium, the road leads to Italy, where the eighth and final race weekend of the season is scheduled for 4 to 6 September. Venue for the final is the Monza Eni Circuit near Milan.