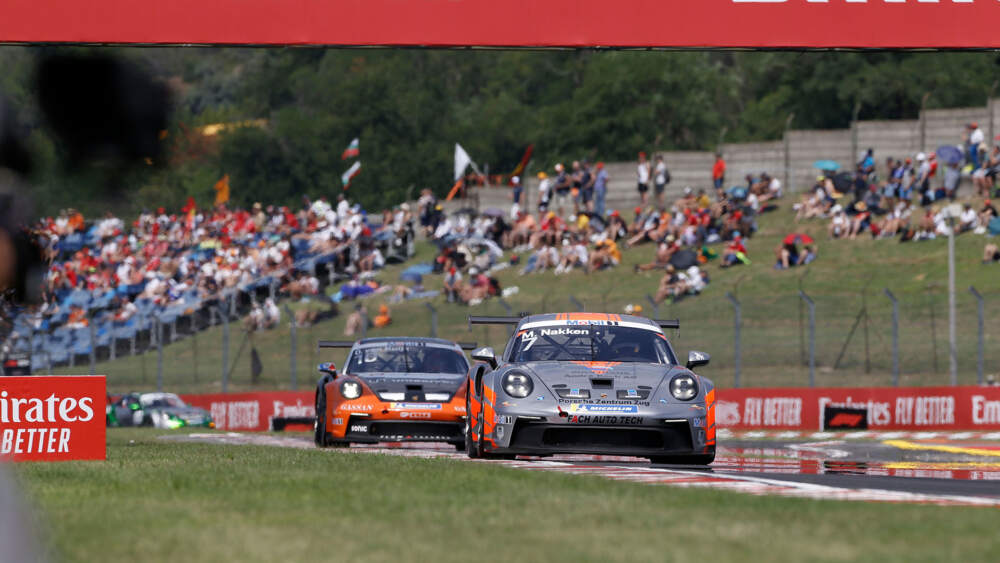 A Swiss day of celebration – just not in Hungary: The fourth round of the Porsche Mobil 1 Supercup at the Hungaroring saw FACH AUTO TECH making the best of a difficult starting point. And they did so with fighting spirit, too. In the race, which coincided with the Swiss national holiday on 1 August, the drivers of the Sattel-based squad made up a total of 20 positions.

“We were actually expecting more this weekend, but we can still be satisfied with our performance in the race,” said Alex Fach. “We also made a step forward in qualifying, only the track limits prevented better grid positions in the end. Nevertheless, Christopher’s eighth place was a solid grid position from which we could certainly have made some progress. We have to carry this momentum forward to the next rounds.”

The momentum referred to by the team principal was particularly evident in Marius Nakken: After a good start, the Norwegian remained cool, calm and collected in his search for points. In the end, the 27-year-old improved from 22nd to 15th place. “After the botched qualifying session, I had a lot to make up for. I just couldn’t find any free space to complete a good lap,” Nakken said. “Overtaking on this track really isn’t easy. So, I’m happy to have made up seven places in the end – even though I would have liked to have scored more than one point.”

Fabio Scherer echoed his teammate’s ambitions. Not only did he make up a total of 13 places during the race, he also set the third-fastest race lap in the field. However, Scherer’s fast pace and convincing performance just wasn’t enough for points. The 22-year-old had started from 30th on the grid after a penalty. “My expectations of myself are of course much higher than 17th place, but my race was still really good,” said Scherer. “The Hungaroring is one of the most demanding tracks on the calendar. We showed that we have the pace to compete among the front runners. We have to convert this into results at the remaining race weekends.”

For Christopher Zöchling, the race was over before it properly began. Starting a promising eighth place, the Austrian made up two positions right at the start. But the 33-year-old collided with a competitor only a short time later. The ensuing impact put an early end to hopes of a top finish.

The next opportunity to make amends is just around the corner: Spa-Francorchamps will play host to the next Porsche Mobil 1 Supercup round of the season from 27 to 29 August.