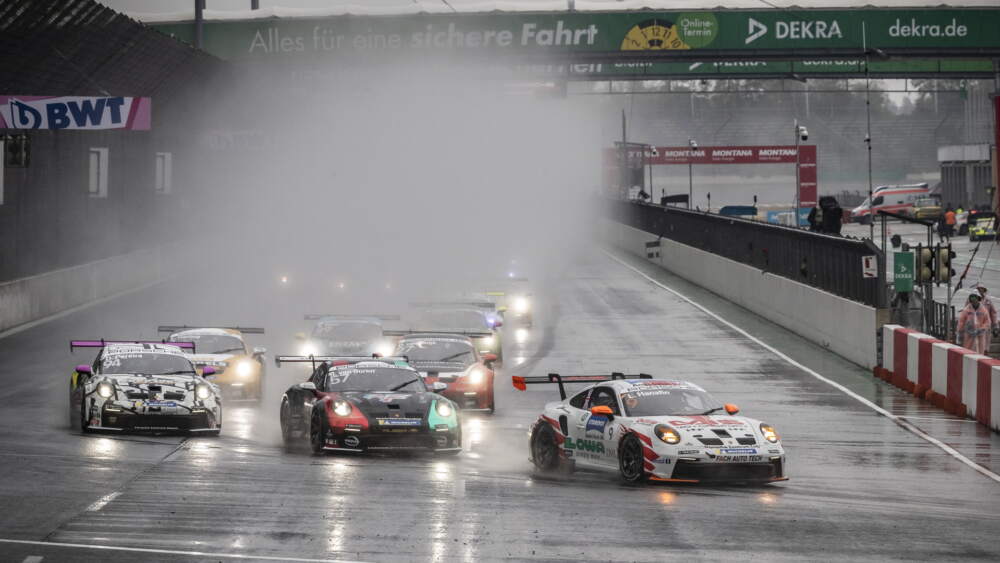 This is not how the FACH AUTO TECH team had imagined the Porsche Carrera Cup Deutschland race weekend in the Lausitz to go: in the races, which were partly characterised by heavy rain, the drivers had to accept several setbacks.

“A weekend to move on from”, was Alex Fach’s summary after the sixth round of the championship. “The weather was anything but easy – especially on Saturday. Of course, there is always the danger that you will be thrown out of the race through no fault of your own. But we have to admit that we didn’t get everything together either.”

It all started particularly promising for Lorcan Hanafin, who demonstrated his skills in the rain. Having started from ninth place in the first race, the Brit settled in fifth behind Max van Splunteren. What followed was an exciting battle for fourth place overall. That nothing came of the hoped-for top result for Hanafin was due to an accident of a competitor. “A car spun in front of me, and I got hit. I didn’t stand a chance. Despite this, there was still second place in the rookie classification as a result,” said the 19-year-old, who again got caught up in an accident on Sunday. A collision at the start of the race through no fault of his own shattered any hopes of a good result.

Teammate Alexander Fach was also out of luck at the Lausitzring. In the wet race on Saturday, the youngster from Switzerland moved up from 18th on the grid to twelfth. But he too was the victim of an overconfident overtaking by an opponent, which led to his retirement on the last lap. “It was really bitter. I knew that my positions on the grid would not be easy for me. I felt particularly sorry for our mechanics because it caused a lot of damage,” said Fach.

Christof Langer got through the races at the Lausitzring much better. He crossed the finish line in sixth (Saturday) and fifth place (Sunday) in the Pro-Am class of the Porsche Carrera Cup Deutschland.

While the German championship is now taking a break, FACH AUTO TECH continues with three consecutive race weekends in the Porsche Mobil 1 Supercup. The next stop is at the Circuit de Spa-Francorchamps in Belgium (26 to 28 August).