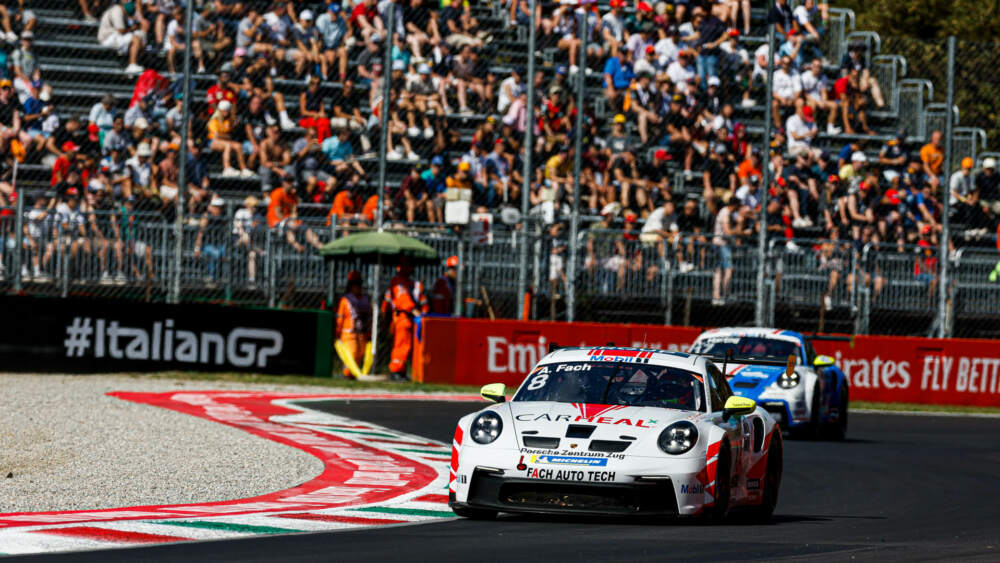 The last race of the Supercup season is done and FACH AUTO TECH – the talent factory from Switzerland – can look back on an eventful year. While Lorcan Hanafin ended his first season in the one-make series as the second-best rookie in the championship, teammate Alexander Fach kept turning heads with strong results in his debut year. He crowned his season with a rookie podium in Monza. Meanwhile, Jukka Honkavuori finished his most successful season to date in the Porsche Mobil 1 Supercup.

“We look back on a mixed season. The team made small mistakes here and there that we have to learn from for next year,” says team principal Alex Fach, summarising the year. “Our drivers have to gain even more confidence and manage to win the battles and not give in too early. All in all, the journey together in 2022 has brought us even closer together and we are satisfied with the outcome of the last races. There were a few more highlights like Jukka’s overtaking race in Zandvoort or the performance of Lorcan in Spa.”

Lorcan Hanafin made a strong debut in the Porsche Mobil 1 Supercup. On his premiere in Imola, the young Brit demonstrated his skills in the rain and, with eighth place overall, laid a solid foundation for the upcoming tasks. His biggest coup came when he finished sixth in his home race at Silverstone. In the rookie championship, he just missed out on second place.

Jukka Honkavuori scored several top 10 finishes, some of which were overshadowed by unfortunate mistakes and collisions. Despite everything, the season ended more than satisfactorily for him as well. One of the Finn’s strengths in 2022 was undoubtedly his fighting spirit, which earned him numerous points in the races.

Alexander Fach also collected his first points in the Supercup in 2022. For the rookie from Sattel in Switzerland, however, the season was peppered with ups and downs. It was all about getting to know the racing series and the tracks that were mostly new to him. The 20-year-old was particularly impressive in the season finale: With ninth place in qualifying, he clinched his best grid position of the year. He turned this into a top-10 finish in the race, which also meant third place in the rookie classification.

“In the coming season we will definitely be back in the Porsche Mobil 1 Supercup. With which driver line-up is not yet certain, but we know one thing: we will definitely work on the battles and on improving the confidence of the drivers. The cars are working well, we know that now. The team works well together and now it’s our task to come back better and more successful next year,” says Alex Fach.