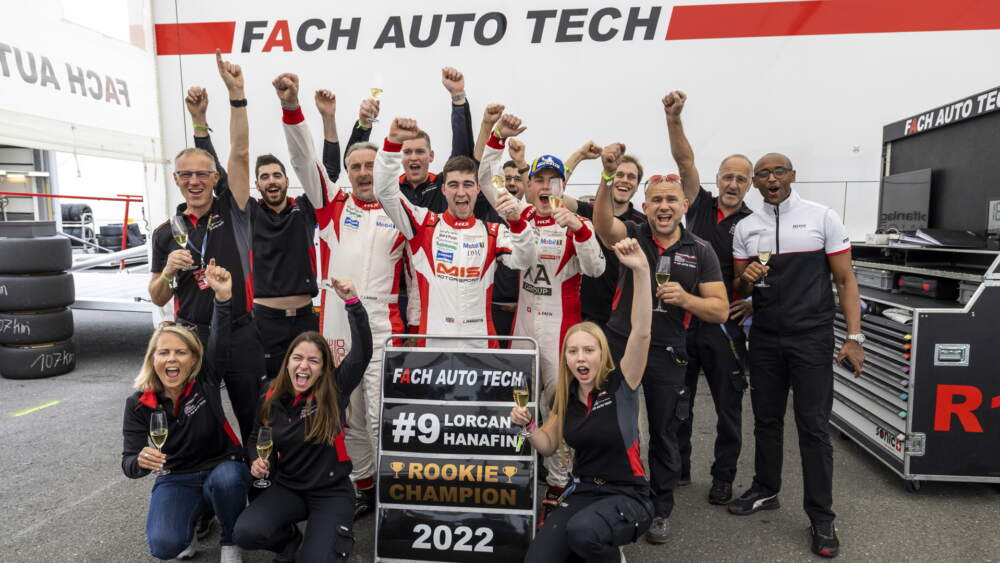 Hockenheim showdown: The champions of Porsche Carrera Cup Deutschland may have already been decided before the final race of the season, but there was still all to play for in the Rookie classification. In an exciting season finale, Lorcan Hanafin battled hard right to the end and was rewarded with title glory. Not only that, FACH AUTO TECH teammates Alexander Fach and Christof Langer gave the team plenty more to celebrate with a Rookie win and a podium in the Pro-Am classification.

“That was a nail-biting finale,” explained team principal Alex Fach after the 16th race of the season. “We were on the edge of our seats and extremely relieved at the end of the race. This season didn’t always go to plan for us, so we were even more satisfied with the strong team performance in Hockenheim.”

Hanafin only had one aim for the weekend: wrapping up the championship in the Rookie classification. The young Briton clearly demonstrated his focus and perseverance on Sunday. Starting in fifth place, Hanafin initially oriented himself towards the front. Close duels with title rival Huub van Eijndhoven ultimately led to contact, which caused the FACH AUTO TECH driver to spin and lose many places. Thanks to a strong race to catch up, it was ultimately enough for fourth place in the class and thus the title. “It was really close at the end. We didn’t give each other anything on the track, I really wanted to achieve a top result. It’s a nice reward to win the championship in the end,” said the rookie champion, who had already finished second on the podium in Saturday’s race.

Rookie Alexander Fach also proved his potential: The youngster recorded his eighth podium finish of the season – and a win in class – giving the 20-year-old enough points for fourth place in the championship. “I am not completely satisfied with the season – we’ve had quite a few ups and downs,” Fach explained. “But that’s just part of motorsport. So, I’m all the more pleased about the victory at the end.” Fach’s other season highlights include the two rookie victories at the demanding Circuit de Spa-Francorchamps.

Christof Langer also had something to celebrate as the 2022 season came to an end. In the first race at the Hockenheimring, the 55-year-old showed a spirited race and worked his way up from fifth on the grid in class to second place. It marked Langer’s second podium of the season, following the success in Zandvoort. On Sunday, Langer wrapped up his season with a fourth place in the Pro-Am classification. “All in all, we can be satisfied with the season,” the Porsche driver summed up. “Of course, not everything went perfectly all the time, but we improved step by step throughout the year. The two podium finishes are the best proof of that.”