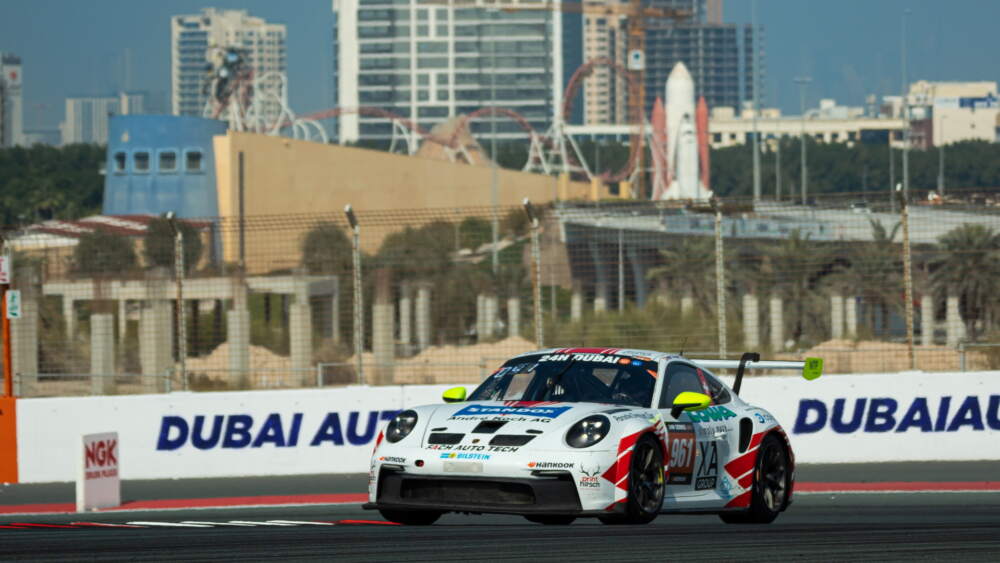 Two Porsche 911 GT3 Cup, two strong driver pairs: FACH AUTO TECH heads into the new season on the Dubai Autodrome from 13 to 15 January 2023. The powerful 24-hour race line-up consists of ten ambitious drivers focussing on a win in the 992 class.

“Last year, we also had two Porsche on the grid. Both cars had top success potential, but unfortunately, we had a lot of bad luck. This year we’re on the attack again and are convinced that our mix of experienced pilots and young talents will enable us to climb the rostrum”, says team principal Alex Fach with a view to the 24H Series season opener.

The #961 Porsche 911 GT3 Cup will be driven by Alexander Fach, Peter Hegglin, Jan Klingelnberg, Christopher Zöchling and Christof Langer. Fach, Klingelnberg and Hegglin were already part of the 2022 Schwyz line-up in the desert. Langer and Zöchling are very familiar with the team through joint appearances in the Porsche one-make series. Fach too can fall back on know-how from the Porsche Mobil 1 Supercup, as well as the Porsche Carrera Cup Deutschland.

There’ll also be illustrious names in the #962 sister car – two-time Porsche Mobil 1 Supercup champion Larry ten Voorde is part of the promising line-up. The Dutchman is supported by compatriot Huub van Eijndhoven, Gabriele Rindone, Alexander Schwarzer and Matthias Hoffsümmer. Schwarzer contributes Porsche Sports Cup Suisse experience with the 911 and Rindone was at the start in the 24H Series several times.

“Our drivers offer a lot of talent, but also a great deal of Porsche and 24H Series experience. Many things can happen in endurance races, however, these drivers and team are in an excellent position for a spot on the podium. We’re well prepared and now we have to make it happen on the track”, the team principal continues.

Kick-off for the weekend on the Dubai Autodrome is on Friday, 13 January, beginning with Free Practice. Qualifying follows at 14:45 local time (11:45 CET). Green flag for the race falls on Saturday at 15:00 local time (12:00 CET). All sessions from qualifying onwards are broadcast on the 24H Series official livestream.