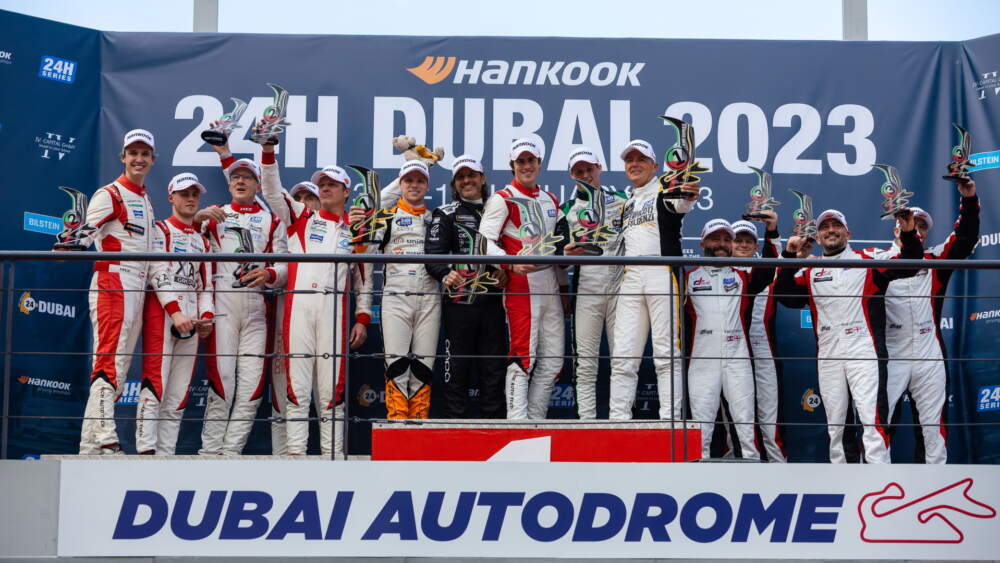 For FACH AUTO TECH, the Dubai 24 Hours from 13 to 15 January could not have gone better. The Swiss squad travelled to the Gulf eyeing up a podium, but came away with a one-two finish. The #962 Porsche 911 GT3 Cup of Larry ten Voorde, Huub van Eijndhoven, Alexander Schwarzer, Gabriele Rindone and Matthias Hoffsümmer took the win in the 992 class, with the driver quintet in the #961 sister car finishing second in the category.

“That was a really fantastic team performance,” commented team principal Alex Fach after the success at the Dubai Autodrome. “We gave it everything for 24 hours and were rewarded with a one-two result – we are really happy with that. We were aiming for the top step of the podium and we achieved that goal. The 992 class was the largest in the field with a number of strong teams competing, so I think we can be very proud with our performance.”

Larry ten Voorde, Huub van Eijndhoven, Alexander Schwarzer, Gabriele Rindone and Matthias Hoffsümmer were also proud to cross the finish line after 600 racing laps. The quintet started the race in fourth position and gradually made their way through the field as the race progressed. At the halfway stage, the car was already leading the 992 category. The crew in the #962 Porsche 911 GT3 Cup didn’t let things slip in the second half of the race either, crossing the line first in class and eleventh overall.

“For the first time in my life I am lost for words,” said ten Voorde after the race. “This is my fourth time at this race and never have I tasted victory – until now that is! Without my teammates, a quick car and a great strategy by the team, none of this would be possible of course. It’s great that the sister car finished in second position, too. It was a close-run thing between us at the end.”

Alexander Fach, Christopher Zöchling, Peter Hegglin, Christof Langer and Jan Klingelnberg also had plenty of reason to celebrate. Their second position rounded off an outstanding team performance at the first round of the 24H Series. The #961 crossed the line in twelfth overall, just behind their teammates. The quintet had already shown that they had the pace to challenge in Dubai, when they put the car on the front row in class.

“We worked really hard for the whole weekend and found a brilliant set-up,” said Zöchling. “We were able to complete the race without any major technical difficulties, mistakes or collisions, and the car ran like clockwork. That’s not something that be taken for granted in an endurance race. The podium is just reward for all the hard work.”

After such a good start to the season, the Sattel-based racing team will continue to prepare for its 2023 programmes. “That has given us plenty of motivation for the rest of the year. We will be taken this positive energy with us into the single-make Porsche series,” said the team principal, looking to the year ahead.